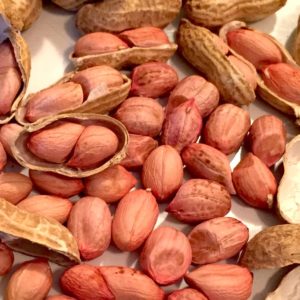 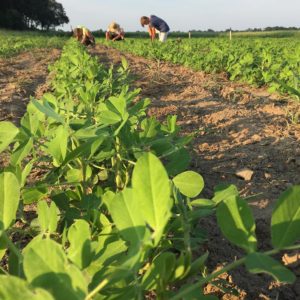 HEIRLOOM -Three years ago Brian Ward of Clemson’s Coastal Research and Education Center started building back up the population of this peanut which had been thought to be extinct since the 30’s. 2016 was the first year Mr. Ward had enough stock to share, and chose 12 farmers to grow out the stock for sharing with the public.

We at Sow True Seed are lucky enough to be selling the stock that Nat Bradford, (of the watermelon fame) grew this year, as he was one of the chosen farmers! Originally brought to the US by West African slaves it the late 1600’s, this peanut could be a contender for the first peanut on record in North America. The Carolina African slowly started to fall out of favor as gardeners and farmers preferred to grow the larger Virginia cultivars which were better for roasting.

While the Carolina African Runner Peanut may be about half the size of modern cultivars, but they are much sweeter and have higher oil content, making them not only a wonderful snacking nut, but great for cooking and oil pressing. While this variety does not have the resistance to disease that has been bred into modern ones, they do provide vital genetic diversity. Having been grown for many hundreds of years prior to their disappearance, they can withstand a wide range of weather and soil challenges. Grown by the backyard gardener, you can count on a good yield because of its sheer adaptability. For this reason, we think you should give peanuts a try!

Carolina African Runner Peanut An annual, flowering herbaceous legume, the Carolina African peanut is a runner variety peanut, spreading its vines while scarcely growing a foot and a half high. The yellowish flowers—with their distinctive pea bonnet configuration—form in clusters above ground. Self-pollinating, the flowers wither and the stalk at the base of the ovary, pushing it into the earth. There the seeds form in pods. To grow a good crop, you will need very loose, loamy soil. Amending with gypsum is recommended. We recommended growing in zone 6 and higher, due to its 130 day maturity requirement. 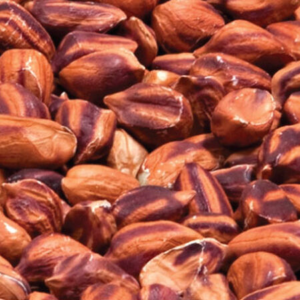