These little pumpkins fit in the palm of your hand and make very nice decorations, as well as being edible! When fully cured on the vine, Jack Be Little pumpkins will hold their decorative value for up to a year! These have a cute shape and color and take 95 days to reach maturity.

Early pumpkins, actually a form of squash, come from early Native American gardens. Native Americans grew these vegetables as part of the “three sisters” group comprised of beans, corn, and squash, since they provide mutual benefits. Pumpkins and squash became a valuable food source for the settlers of the New World.

Sowing: Gardeners with short growing seasons may want to start these Jack Be Little pumpkin seeds for sale indoors a month before the last expected frost. Since pumpkins do not take well to transplanting, peat pots are the best option. Plant two seeds per pot, later clipping off the weaker seedling. Harden the seedlings by exposing them to the weather for several hours at a time during the week before transplanting. About a week after the last frost or when the soil temperature reaches an average of 60 degrees F, plant the seedlings in very rich soil 8-10′ apart in rows 10-12′ apart. Another option is to plant the seedlings in hills of two, 8-10′ apart. To direct sow, plant the seeds a week after frost 1/2″ deep, 3-4′ apart and thin to 8-10′ apart. For companion planting benefits, plant Jack Be Little pumpkin seeds along with corn but avoid planting them with potatoes.

Growing: Since pumpkin seedlings do not tolerate frost, provide protective coverings if cold weather threatens. Keep the soil moist at all times, but avoid getting the leaves wet as this can cause diseases such as rot or mildew. When the vines begin to develop, a layer of mulch will help conserve moisture and control weeds; mulch also will keep the pumpkins clean and protect them from too much soil contact. By midsummer, pinch off all the blooms to concentrate the plant’s energy on the developing pumpkins.

Harvesting: Pumpkins can be harvested as soon as the stem begins to dry and the skin becomes too hard to pierce with a fingernail. Because cold weather can damage pumpkins, they should be harvested before the first frost. Cut the stem with a sharp knife, leaving a 2-3″ length.” Do not carry the pumpkin by the stem; if the stem breaks off, use it as soon as possible, since this causes the pumpkin to deteriorate quickly. Cure the pumpkins in the sun or a dry location until the stem shrivels; do not wash pumpkins you intend to store. Jack Be Little pumpkins will keep for nearly a year, and have delicious flesh in addition to being extremely decorative.

Seed Saving: By the time the pumpkin has been cured, the seeds are mature. Cut the pumpkin open, remove the pulp and seeds, and rinse off the pulp. Put the mixture in a bowl of water to remove the remaining pulp; the good seeds will sink. Remove the good seeds and spread them out to dry for 2-3 weeks, stirring them at times to make sure they dry completely. Store Jack Be Little pumpkin seeds in a cool, dry place for up to 4 years. 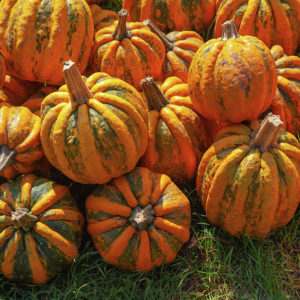 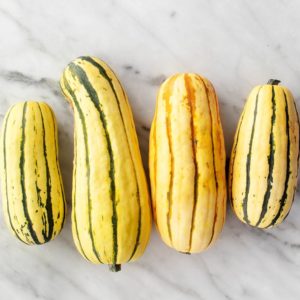 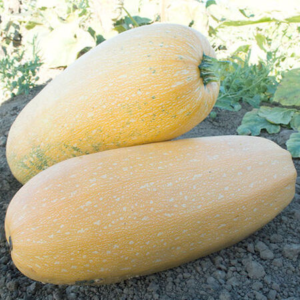 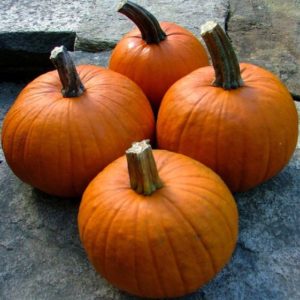 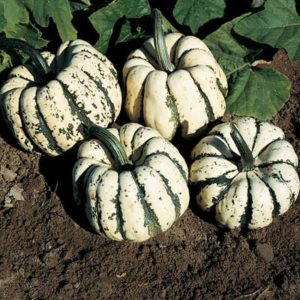 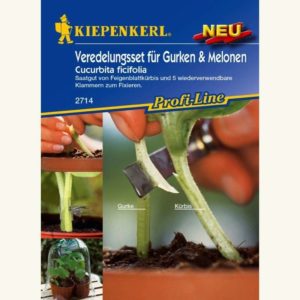 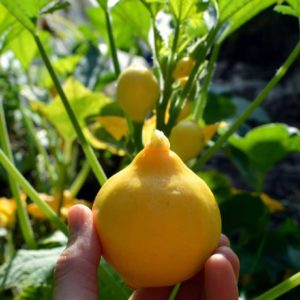 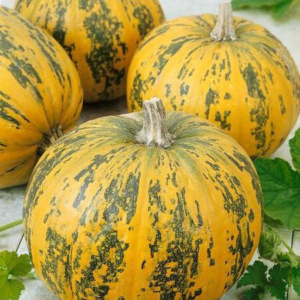