These fingerling type eggplants are sweeter and more tender than other varieties. The elongated shape contains fewer seeds and is thin-skinned. This plant prefers full sun and can be ready in as few as 70 days.

Eggplant appears to be a very ancient fruit; the earliest references to it can be found in Chinese and Indian records. Though usually considered a vegetable, botanists classify eggplant as a berry. Early varieties of eggplant were named for their resemblance to large white eggs; in Europe, eggplant is usually referred to as aubergine. In medieval times eggplant were called mad apples, because they were thought to induce insanity. Experimental horticulturist Thomas Jefferson included varieties of eggplant in his gardens; at the time, growers used eggplant mostly for decorative purposes. Regions of southern and eastern Asia especially appreciate the eggplant, naming it “king of vegetables” and making it a staple of their cuisine. In addition to the sterotypical purple pear-shape, eggplant comes in all shapes, sizes, and colors.

Sowing: Though gardeners with long growing seasons will be able to direct sow their eggplant seed when the soil reaches 70 degrees F, starting the seed indoors is best in most areas. About 8-10 weeks before the last expected spring frost, plant long oriental fingerling eggplant seeds in pots 1/4″ deep. Keep them in a sunny window or under a grow light, maintaining a temperature of around 80 degrees. Germination of eggplant can be spotty, and may take several weeks. Keep the seedlings moist and provide organic matter for the best development. Gradually expose them to the elements by leaving the pots outdoors during the day. When the average air and soil temperature reach 70 degrees, or about 3 weeks after the last frost, plant the seedlings in well drained soil in full sun; for fullest growth, allow each plant 2-3′ in all directions. Eggplant also grows very well in container gardens; most northern gardeners depend on this method in order to succeed in growing this heat loving plant.

Growing: Eggplant thrives in the full heat of summer; row covers, black plastic, or other methods to conserve heat may be necessary in some climates. If temperatures threaten to fall below 55 degrees F, cover the plants. As soon as the seedlings become established, mulch them to conserve moisture and control weeds. Keep the soil evenly moist, and apply fertilizer or organic matter once monthly.

Harvesting: When the skin of an eggplant begins to take on a high gloss, it is nearly ripe. To test for ripeness, press gently on the skin; if the flesh remains indented, it is ready to be harvested. Eggplant reach their best eating quality at about 1/2 their mature size, since oversized eggplant can turn tough and bitter. For freshest taste, use immediately. If necessary, eggplant can be stored in the refrigerator for up to a week. If the seeds inside begin to turn brown, this indicates that it is overripe. Keep in mind that some parts of the leaves and flowers are poisonous if ingested.

Seed Saving: Because eggplant pollinates itself without the help of insects, cross pollination is not likely; however, separate different varieties by about 40′ to guarantee genetic purity. When the fruit is fully ripe, it will drop off the plant; at this stage it will be dull and purplish brown with slightly puckered flesh. Cure for two weeks. Several methods for separating long oriental fingerling eggplant seeds from the flesh are effective. Some seed savers grate the bottom portion of the eggplant, which contains the seeds – since the seeds have a protective coating and are very slippery, they will not be damaged. Place the grated mixture in a bowl with water and work it with your fingers; the good seed will sink to the bottom. Another method is to cut the eggplant into 1/2″ squares, put them in a blender, and pulse for a few seconds; next, proceed with washing the seeds. Remove the long oriental fingerling eggplant seeds at the bottom of the container of water to a flat surface, and allow them to dry; store in a cool, dry location for up to five years. 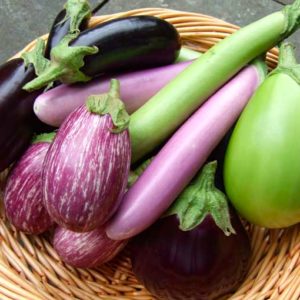 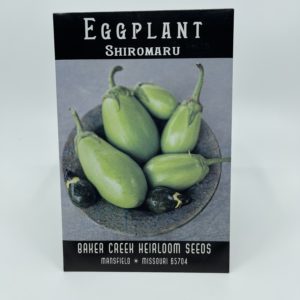 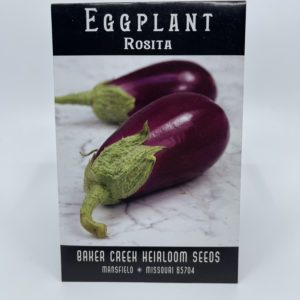 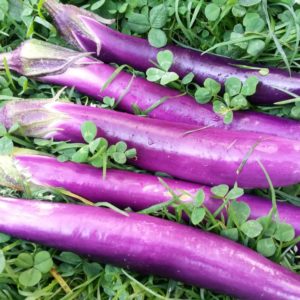 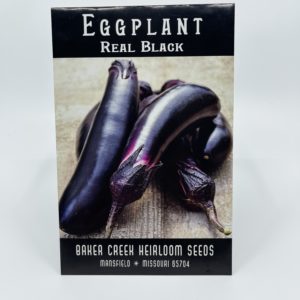 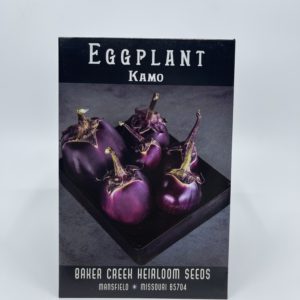 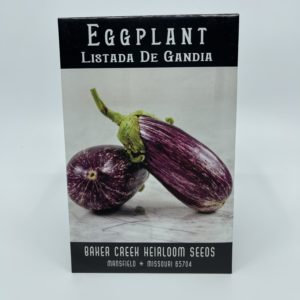 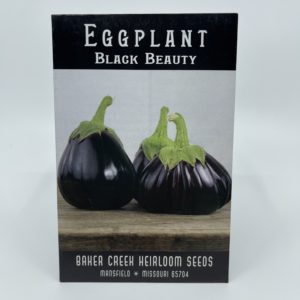